And on the third day touring the Holy Land . . .

10 March 2014 – Megiddo or Armageddon as we hear it called by some today: the site of the final battle envisioned in Revelation (16:16) when good finally will triumph to bring an end to all destruction.

A model of the walled city of Megiddo.

Which makes some sense because in 7,000 years, this place has been conquered and rebuilt over 25 times. It’s unfortunate that the geography makes this the path for travel between such ancient superpowers as Egypt to the south, and Syria and Mesopotamia to the north. Set at the south-central edge of an incredibly fertile valley (the Jezreel Valley, which is known as the breadbasket of Israel), the inhabitants of Megiddo hardly had a chance! Nazareth can be seen in the distance northeast of Megiddo – just on the opposite edge of the valley. In other words, a young boy growing up in Nazareth certainly would have known and remembered the bloody history of Megiddo. 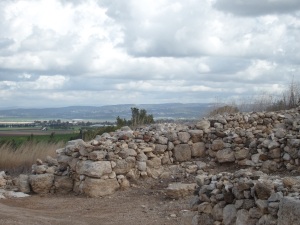 Vertical Shaft inside the walled city leading down, down, down 120 feet to a water spring 215 feet through a tunnel — an ancient way to get fresh water!

In our time of silent reflection on Megiddo, I wrote these words: Twenty-five times this little city has been conquered. I can’t imagine! How do you make a life in the midst of such a history when the very land under your feet runs red with the blood of so many others who tried to make home in the very same spot under your feet? How do you ever feel secure? Safe? Fearless? God really is their only hope. Their only security. And yet again we choose to secure ourselves. To allow might to be our fortress – no matter how many times that experiment fails. Jesus grew up not far from here. Which means he knew well how vulnerable his people – all people – were. How fragile their history. How often their choice to defend themselves with the very tools of force used against them. It would never work. It will never work.

Peace. How do we have peace in the midst of our violent, ready-to-fight history?

On to Nazareth: The childhood home of Jesus.

A remaining ancient manger (for feeding horses) on Megiddo.

Jesus, we’re stuck in a traffic jam in Upper Nazareth. And down below I can see the house of Mary and the house of Joseph – which of course confirm that Mary and Joseph were neighbors. The boy next door. It was meaningful to be at the Greek Orthodox Church of Mary’s Well. I like the tradition that she was drawing water from the well the first time the angel visited. Supposedly she was so afraid, she ran all the way home! It was a long way actually as we discovered when we were walking to it in the rain. . . . The Church of Joseph’s house was amazing. Ruins from the house of Joseph, which most probably were where Jesus grew up. How very cool to see what very well was Jesus childhood home.

Ruins in Nazareth believed to be the Holy Family’s home.

A carpenter shop in the front and the home in the back of it, if you have enough money and land. Which they supposedly must have according to the ruins. . . . 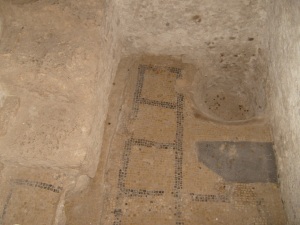 To imagine the spot in Mary’s house where the angel visited – AGAIN, or for the first time if you don’t go with the tradition of the well. Courage certainly was the word that kept coming back. That must have been her trek from the well back to her home. Fear turned to courage with every step. . . . Courage overcoming the fear. Courage to say let it be. Courage to go along with God’s big dream for her life – and for the life of the world! . . .

The well of Nazareth (the believed site of the messenger’s first visitation).

Icon of the Annunciation. 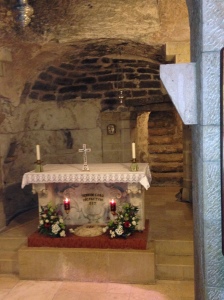 The site believed to be the spot of the 2nd visitation to young Mary (in her house).

Our visit was a bit rushed, but so incredibly beautiful. I especially loved the family portraits of Mary, Joseph, and Jesus. You don’t see all three of them together very often in the art. 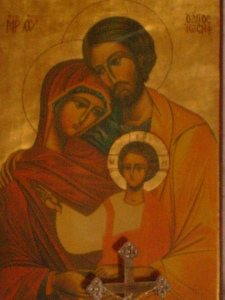 I love that one that looked Middle Eastern – more true to life. That one was great because it showed a whole family – the importance of each one of them in the story. . . . The importance of each one of us in the story. . . . It looked to me like such love. Such joy. Such laughter in their family. But such seriousness too. Growth. Learning. That very same courage both Mary and Joseph had – they passed it on to him. I guess for such a big dream, you needed two who were brave, despite their fear. Two who would say “let it be so with me as you desire!” Two who could build a foundation of courage and hope and obedience. . . . God, won’t you increase in me my courage and hope and obedience? . . . Let us all hear the voice of whatever messenger you send. Give us courage not to run away. But to sit. To wait. To listen. To allow a space in each one of us to open up from the fear into singing a song of the praise of God! Let us sing out to glorify the LORD who sets us free! 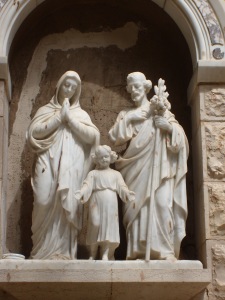 Statue of the Holy Family outside the Church of St. Joseph. Nazareth.

Late afternoon, 10 March 2014: Stopped in Cana, I decided to re-read the story while I waited for the group that went to see the holy site. John 2:1-11: Jesus, his mother, and a few first followers attend a wedding feast a few miles northeast of his hometown. If you don’t know the story, read it. The gospel of John records it as the first of many of his great signs: unexpected abundance! In that spot, my reflections on the story were these: So clearly Jesus says to his mother, don’t push me! And yet . . . Mary, still the agent of God’s Spirit, persists. Lovely!

Which leaves me wondering what signs I’m given each day.

This gorgeous blue sky of Cana as the backdrop for beautiful, wispy clouds – the very same patch Mother Mary watched that day she first was visited.

Ru (my lil spirit dog): my experience of resurrection after putting down the last one on Good Friday. When my heart was broken in two, this sweet lil puppy was the gift to me that I would stand back up again. I would love and live and carry on – not because of me. But because of the Holy One. The One that is Life, that rises again and again and again. 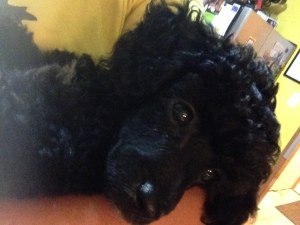 Unexpected kindness and compassion in the midst of struggle and difficulty. Everything eventually working out. It always will. ALL always shall be well!

The cosmic pattern, the Way: living, and dying, and living again. If only we finally would learn your Way, O Mysterious Force.

All these signs of amazing abundance surround us every day!

a stick bug in my lavender, my beloved climbing rose, and my first-fruits of raspberries! 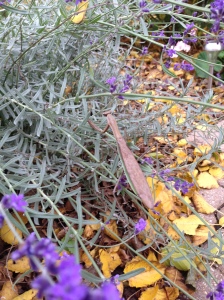