More from an amazing Holy Land Pilgrimage from one year ago:  Lent 2014! 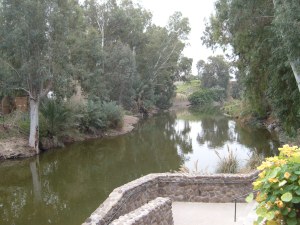 Here we sit – toes nearly touching the water. Catfish swimming all around. Doves cooing as birds sweetly sing the eternal praises of God. (BTW: I can’t get over the fact that my own toes have been where the toes of Jesus have been! It’s really cool when I bend over each morning to touch them thinking of the God who lived among us – touching this earth with toes too!) MY BSFFFF (Best Spiritual Friend Forever Forever Forever) is here at my right hand. The beauty of this place was most unexpected! It’s not dry and desert (as it must be 100 miles south, closer to Jerusalem – where Jesus most probably was baptized). But here it is lush and glorious – alive with birds and fish and greens and people! Amazing! Through this river, God’s people entered. In this river, God’s people were washed clean for a new life in the Promised Land. In this river, God’s Christ was anointed to ready himself to bring new life to the world. With him, God was well pleased!

“. . . just as he came up from the water, suddenly the heavens were opened to him and he saw the Spirit of God descending like a dove and alighting on him.” (Matthew 3:16) The heavens at the Jordan River, Galilee. 9 March 2014.

In the telling of our baptismal stories – in sharing our confirmations and ordinations, here my BSFFFF and I have renewed each other for the work that lies ahead. Here we have shared God’s laughter – God’s peace. God’s all-encompassing love. God’s strength. God’s refuge. . . . From these waters we can go forth to do anything. Be anything; for we are God’s. Let these moments, this time, our prayers and tears and laughter shared, ready us. Heal us of all the NOs to a life of YES, YES, YES!!! I love you, God, and give you thanks for this very special time of remembering Jesus’ baptism here. Of remembering our own! Praises be!  Amen.

Next: on to Magdala and an active archeological excavation of one of the only untouched First Century synagogues! Keep reading to find out more! 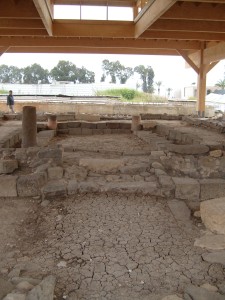 MAGDALA — a First Century Synagogue:  Our pilgrimage leaders tell us that Magdala was a First Century city that was destroyed in 67 A.D. It is right in the wadi – a place that is a dry valley until it rains to become a raging river. The synagogue was always in the center of town. Therefore, Magdala probably was much bigger than it first was thought. According to historian Josephus, 40,000 people lived in Magdala. He claimed it was one of the biggest and most important cities in First Century Galilee. It was a one day’s walk right down the Valley of Doves, on the Valley Road from Nazareth to Magdala on the Sea of Galilee. Supposedly it was too muddy in this wadi to walk from Magdala to Capernaum – you had to take a boat. Magdala was the wealthy port over to Capernaum – a place of rest and entry into the country for all nations. Magdala was filled with Jews who were fishermen, who would take their fish to the commercial shops of Capernaum, the crossroads of the world where those from all walks of life lived.

Magdala was all about fish – ruins reveal pools for sorting fish near the sea, then small pools in shops for storing fish until they were sold. There even are salt water pools a bit further from the sea where fish that went unsold that day would be dried for later use. To this day, Magdala is known for its fish! . . . As far as history reveals, Romans also lived in Magdala alongside Jews – right at the foot of Mount Arbel. In 67 A.D. Magdala was destroyed by the Romans. Thousands were killed. Others were sold into slavery. Very few people survived. When the rainy season came again, mud buried the ruins of this First Century city. It all would have gone unknown if not for the efforts of a prominent Jerusalem hotel. 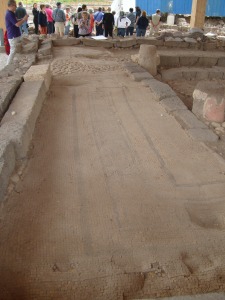 Remains of Mosaic found in First Century synagogue of Magdala.

Early in 2000 A.D., they wanted to expand their enterprise to the beautiful retreat area of Galilee. When they began to break ground for their exquisite resort, the earth revealed the ruins of Magdala, or Migdal as it’s known in Hebrew. A city that had been hidden for over one thousand, nine hundred years. In 2009, the Magdala synagogue was unearthed. The Franciscans now own the property and have built there an amazing basilica. . . . Magdala remains an active archeological site to this day. 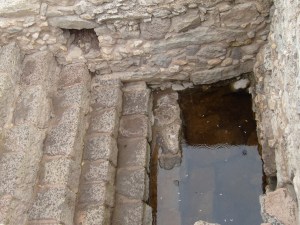 A Mikvah found in First Century Magdala — 7 steps down into living/running water for purification baths in Jewish homes. 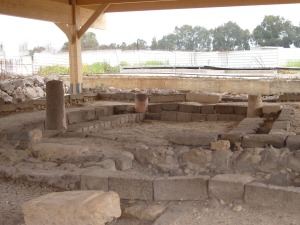 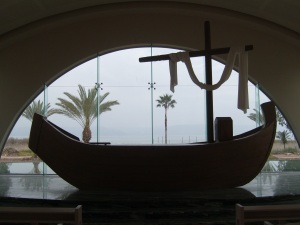 Pulpit and Table of chancel area in new sanctuary overlooking Sea of Galilee in Magdala.

One more entry from 7 March 2014 — ARBEL in Galilee: Our pilgrimage leaders tell us that from Nazareth, the childhood of Jesus, to the Sea of Galilee, the place of his ministry, is just fifteen miles. At 30 years of age, he walks the Valley Road to begin his ministry. What strikes me from Mount Arbel is that this place (Galilee) is so small. Magdala is the city between the two. He walked this short distance from childhood to adulthood. One Galilean town of about 200 people to another small Galilean place. All in an effort to change the world. Four miles from his home, the city of Sepphoris was destroyed by the Romans in 4 CE when he was just four (or so) years old. [See Jesus in Matthew 5:14: “A city built on a hill (as Sepphoris was) cannot be hid.”] From this mount you can see the Valley Road.

The Valley Road from Nazareth, past Mount Arbel, to Magdala, to the Sea of Galilee.

He walked right here. Leaving his home. On the way he passed Arbel – where his fellow Jews hid out in caves on the mountain to try to resist the occupation of his land – from Syria in 167 BCE and Herod the Great closer to the time of his life in 39-40 BCE and then from Rome in 66 CE. . . . 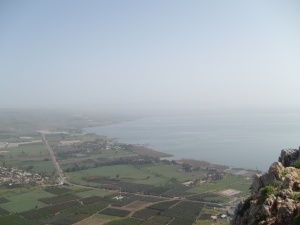 Why did he go to the sea? What called him to walk down the Valley Road to begin to make the effort to try to change the world? . . . Was he drawn to the Living Waters of Galilee? . . . And how deeply did Arbel and Sepphoris affect him? . . . How deeply did he desire freedom for his people? An end to the violence. Hope. Lives of simple gratitude and freedom and joy instead of the foot of another on your neck telling you no. Holding you down. . . . How much of this was for freedom – not just of our sins for life everlasting; but here and now. For right-relationship together TODAY?!

The Cliffs of Arbel and the Valley of the Doves.